Me on Strange Sweet Song 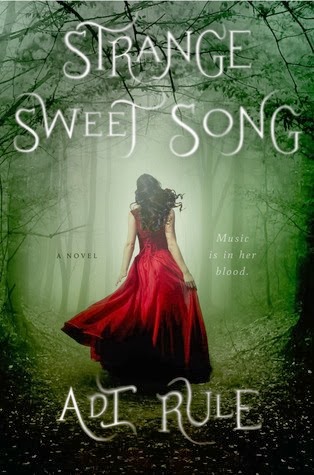 Outside Dunhammond Conservatory, there lies a dark forest. And in the forest, they say, lives a great beast called the Felix. But Sing da Navelli never put much faith in the rumors and myths surrounding the school; music flows in her blood, and she is there to sing for real. This prestigious academy will finally give her the chance to prove her worth, not as the daughter of world-renowned musicians, but as an artist and leading lady in her own right. Yet despite her best efforts, there seems to be something missing from her voice. Her doubts about her own talent are underscored by the fact that she is cast as the understudy in the school's production of her favorite opera, Angelique. Angelique was written at Dunhammond, and the legend says that the composer was inspired by forest surrounding the school, a place steeped in history, magic, and danger. But was it all a figment of his imagination, or are the fantastic figures in the opera more than imaginary? Sing must work with a mysterious Apprentice as her vocal coach, who is both her harshest critic and staunchest advocate. But he has secrets of his own, secrets that are entwined with the myths and legends surrounding Dunhammond, and the great creature they say lives there.

Strange Sweet Song is ethereal and mystical, a slow magical tale of magic, wishes, and one girl's desire to sing. But something lurks in the forests and the shadows around her, something that could change everything.

Sing isn't a normal girl, daughter to world-famous musicians. What I noticed most about her was her insecurities. She has some confidence in her ability, yes, but she's trapped in her mother's shadow. She's in a precarious situation in which she wants to sing in the role of Angelique, she desires it above all else, she craves to prove her worth to the world, but it's those inadequacies she feels that weigh her down. It's only until she's pushed by her father and to the side by those around her does her ego appear and she becomes ruthless in her quest. But that part of her is still missing, the honest part of her that will shine when she sings. Without it, she's nothing.

The rotating points of view tell different sides that come together to form the story as a whole. One is the Felix, one is a tale of magic and curiosity in Dunhammond's past, and the last is Sing in the present day. All three worked with each other, revealed secrets and suggested possibilities as the book went on.

Sing heads to the conservatory to spread her wings, metaphorically, in a new place. To sing as she wants, to find a place of her own, to grow. Of course, what she gets beyond that is the competitive setting of a musical academy for gifted people. What she gets is high-stakes, high pressure, divas looking down their noses, and more than a little backstabbing and cattiness.

The book moves at a gentle pace, never rushed, never missing a beat. I was surprised at the slow build in tension considering the mystery and the intrigue. A slow book, yes, but also an enjoyable one. I imagine this will intrigue those with a love of music and a slight gothic quality to their mysteries.

(I received an advance copy of this title from Raincoast Books.)
Posted by Lindsay at 6:00 AM