Me on The Goddess Test 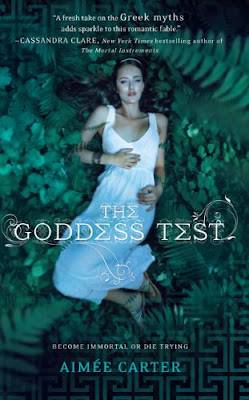 At times mythical, thoughtful, and sweetly romantic, Aimée Carter's debut novel The Goddess Test is the story of selfless 18-year-old Kate Winters, who would give anything to keep her mother from dying. After meeting a dark and handsome stranger, she soon learns that anything means anything, like six months of the year every year. Like her life.

Kate, who hasn't had the easiest life so far, travels to Eden, Michigan so her mother, frail and weak from fighting a losing battle with cancer, can die in her hometown. Not wanting to leave New York, Kate complies in order to make her mother happy, and possibly to steal more time with her, even though she enters the town with no friends and no other family members to speak of. Through a series of odd and jealous teenage girl circumstances, she meets Henry, the young, dark, and handsome resident of Eden Manor, and claims if she'll live with him from the start of fall to the beginning of spring, he'll keep her mother alive.

Soon finding herself in the situation Persephone once found herself in, Kate learns Henry is Hades, the Greek god of the Underworld, and to ensure her mother's continued survival, she mast pass seven different tests. If she passes them all, she'll become an immortal. A goddess. Henry's wife.

If she fails... well, failure might mean death for Kate herself.

I'll admit, I love Greek mythology, so I knew I would at least like this book before reading it. Aimée Carter brings a fresh twist to this mythical tale, reworking and reimagining Greek gods and goddesses to make them, if possible, more human in their encounters with Kate.

The character of Kate is so strong, she's willing to face these tests, willing to do whatever it takes to keep her mother alive. Her dedication, her honest affection, her lack of guile and duplicity, was wonderful. I understand why she rarely questioned Henry on what was required of her in terms of the seven tests. It wasn't that she didn't care, but more that she wanted to help Henry by being his new queen while keeping her mother alive long enough for her to accept her passing. Sure, wanting her mother to stay alive sounds selfish, but who wants to lose a parent to cancer at 18?

All of the characters, human and immortal alike, were creatively and interestingly described. Even the Greek gods and goddesses came to life, in a manner of speaking, even if I couldn't quite determine who all of them were in terms of their classical Greek names.

The twists and tweaks of the classic tale were intriguing. I feel this book would have been different if it were a straight modern retelling of Persephone and Hades with Henry and some girl whose name starts with a P. Instead, it is more like Henry moving on to a new relationship, a different relationship, searching for a new queen in Kate. One that might love him. His failed relationship with Persephone ruined him in terms of finding love and friendship with his co-ruler, and Kate's willing to be friends and show him how it could be, even if at the beginning she doesn't totally want to fall for him. Even if there's something drawing her to him. Even if he's gorgeous.

Everything about the book was amazing. Kate and Henry. The various secondary characters like James and Ava. The grand and glorious but slightly creepy Eden Manor. The outdoor settings and the nearby river.

This book surprised me. It took me on a journey through a mythology I've long been fascinated with, and introduced me to characters I'm longing to read more about. The wait for Aimée Carter's next book will feel unending, but knowing how enchanted I was after reading The Goddess Test, I'm sure it'll all be worth it.

(I received this e-galley by request through NetGalley from HarlequinTeen for the sole purposes of reading it and reviewing it.)
Posted by Lindsay at 12:02 AM

Email ThisBlogThis!Share to TwitterShare to FacebookShare to Pinterest
Labels: book review, mythology, YA