The last stop of Cassandra Clare & Holly Black's City of Fallen Angels/Red Glove Tour (I think, Holly said this was their last stop) happened on April 18 at 7pm at the Chapters at Metrotown in Burnaby, BC, Canada. I'm not sure how many people the bookstore thought were going to show up, but I heard Tuesday morning at least 540 people were there.

This is my story of the event. :) Complete with pictures.

My friend drove my sister/pack camel and I to the SkyTrain, and we took the train to Metrotown. If I hadn't broken my ankle, I would've gone alone. If I hadn't been cleared to walk on it, it's possible I wouldn't have gone. My arms are so sore, but only because the trip from the station into the mall and to the bookstore and then again back when we left was so long.

We got there around 4 and the wait line was about 15 people long. Then it looped around and down along more shelves and back and around and got massive. I did get a chair to sit in while waiting in line, and I was close enough to the front of the line that I got a seat when the event started, which was awesome. I wasn't going to pitch a total fit, but I was in line for 3 hours, then the reading and Q&A was about another 90 minutes. 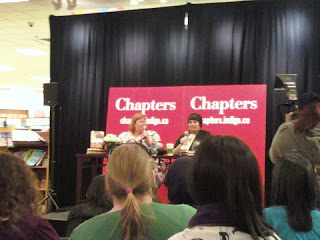 Cassie and Holly were super nice, answering a bunch of questions and signing all the books people brought. I had 8. :) Some questions people asked were good, but some were repeated ones they've answered bunches of times over and over again on their websites, or they were questions they can't answer. No, Cassie can't tell you if Clary and Jace will end up together at the end of City of Heavenly Fire. If she can't tell everyone who e-mails her and who asks her on Twitter every day, what makes you think you're special enough to be told on a Monday evening surrounded by 540 other excited fans??

Then came the time to get books signed and I had to call in my pack camel to carry all my books. Before the event, everyone was told that while Cassie and Holly would sign all books, they could only personalize 1 book in each series. Holly chose to sign both White Cat and Red Glove to me. ;) 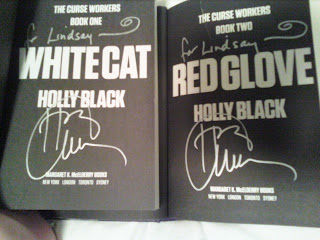 Cassie personalized my copies of City of Fallen Angels and Clockwork Angel. :) It wasn't until we got home that I realized the copy of CoFA with my name in it wasn't the one with the extra letter. *face-palm* Fail on my part, but it was easy enough to fix. I carefully pulled out the letter and stuck it in the other book. 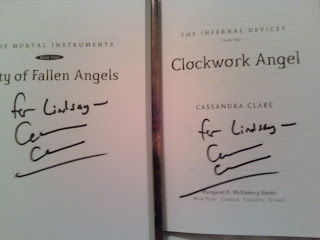 Swag was cool. Buttons, postcards (which tell a very funny story), a booklet with excerpts of Clockwork Prince and Black Heart, a bracelet, and a poster.

All in all, it was pretty awesome.

Of course, to make it that much trickier for me, they were up on a little stage which I couldn't get up onto because stairs are still a big no for me on crutches. So of course I had to explain to Holly and Cassie about my ankle and surgery and why I looked like a dork with someone carrying my books for me. Their expressions are awesome. :) Plus, there's my big head taking up the whole right side of the picture. 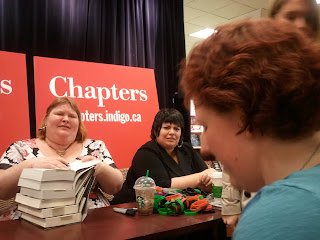 Holly's expression just before was the best. ;) (I cropped out my big head) 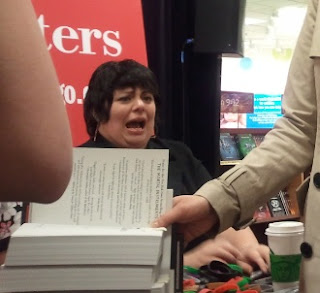 And so that's how I met Cassandra Clare and Holly Black for about 5 minutes on a Monday evening. And then they probably forgot me after signing books for the rest of the 540+ people crowd. :)
Posted by Lindsay at 2:16 PM

Email ThisBlogThis!Share to TwitterShare to FacebookShare to Pinterest
Labels: book event, YA