Me on Spectacle Volume 1 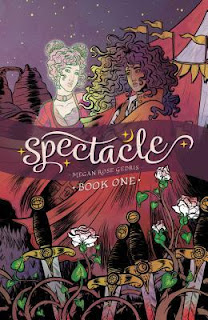 Pragmatic engineer Anna works as a psychic in the Samson Brothers Circus, but she doesn't believe in anything supernatural—until her twin sister Kat is murdered and comes back as a very demanding ghost. Sharing a room with her sister was hard, but now they're sharing a body while trying to identify the killer. With few leads, a troupe full of secretive folk, and strange paranormal occurrences popping up around the circus, solving the case seems near impossible. But the murderer in their midst may be the least of their problems...

Spectacle Volume 1 is mysterious. It's full of secrets, full of characters with their own different personalities and motives, and full of questions when it comes to those characters and their motives.

Anna is practical, she leans more towards the scientific things in life. Like her conjecture engine. Like sense and reason. Not the tarot cards and fortune telling she does as her role in a travelling circus. She's not like her twin sister Kat, a knife-throwing night owl who sometimes leaves a mess in her wake. But they're family. They're all each other has, and so they tolerate each other. Until one night when Kat is murdered, leaving behind a rather demanding ghost for Anna to see. With this sudden death, Anna is on the hunt for the murderer, but Kat's still keeping secrets from her sister. Everyone in the circus keeps secrets, and it's up to Anna to sort through them in order to find Kat's murderer. But something else is going on around the circus.

The art style is rough and charming, it didn't take long to grow on me. The different shapes of the circus cars and tents. The wild mass of Anna's hair, her and Kat's outrageous expressions when the find out Kat's dead and sticking around as a ghost. The different people who work in the circus, like owner Jebediah Tetanus, squeaky-voiced Flora, and Kat's show partner Carl. They all have their own look, all have a way of standing out.

To be honest, when I started reading this I wasn't sure where it was going to go, what I was going to find. What I found was a story full of secrets, of people running and hiding and finding a place where they can feel safe. But safety only lasts for so long, those hidden skeletons stay hidden as long as someone doesn't let them out. Considering how this volume ends, I'm rather interested as to where the story will go. What secrets Anna will uncover, what secrets Kat is still keeping to herself. What's chasing after them.

(I received an e-galley of this title to review from Oni Press through NetGalley.)
Posted by Lindsay at 4:00 AM