Me on Bruja Born 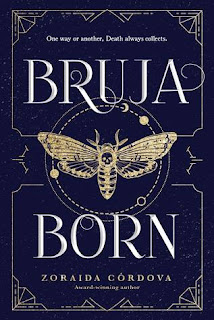 Lula Mortiz feels like an outsider. Her sister's newfound Encantrix powers have wounded her in ways that Lula's bruja healing powers can't fix, and she longs for the comfort her family once brought her. Thank the Deos for Maks, her sweet, steady boyfriend who sees the beauty within her and brings light to her life. Then a bus crash turns Lula's world upside down. Her classmates are all dead, including Maks. But Lula was born to heal, to fix. She can bring Maks back, even if it means seeking help from her sisters and defying Death herself. But magic that defies the laws of the deos is dangerous. Unpredictable. And when the dust settles, Maks isn't the only one who's been brought back...

Bruja Born is dark and dangerous and full of magic, full of sisters sticking by each other. Full of love and loss, of pain and sorrow, of healing and strength.

At the start, Lula is a complicated and angry young woman. Angry that things are different at home, ever since her sister Alex came into her powers and their father was returned to them. Angry that she still feels trapped, like when she was locked away in a tree in the magical land of Los Lagos. Angry at the scars that now run across her cheek, the scars that make her feel ruined. Things changed in Los Lagos, and since they've been home, Lula isn't sure how to feel. But she still has her boyfriend Maks. He's the only thing that makes everything feel better again. Feel normal again. Until he's taken from her. Until Lula decides to risk everything in order to save him. But moving against the natural order of life and death is never good, especially when Death herself comes to collect what she is owed. And so comes what feels like and impossible mission for Lula: set to right the balance that she has upset, but that means losing Maks.

So many things raced through my head while reading this. What it is to be in pain, to hide it, to willingly suffer through it for a number of reasons, be they selfish or selfless. What it is to be in love, to love with all of you and doing anything in order to keep that person with you. What it is to admit defeat or admit to a mistake, the frustration and the anger when we try so hard to fix it on our own only to fail over and over, and the depth of the well of support that comes when we finally do ask for help. It's a book of magic and brujas, of tradition, but it feels so human, so realistic and grounded and honest. Labyrinth Lost is about Alex, about her coming to terms with and realizing who she is, as a bruja, a sister, a daughter, a teenage girl. Bruja Born is all about Lula and her demons, her determination and her stubbornness, her loves and her mission. It's just as deep and enchanting as the first, and I'm really looking forward to reading the next.