Me on The Case for Jamie 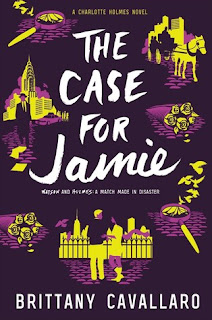 It's been a year since the shocking death of August Moriarty, and Jamie and Charlotte haven't spoken. Jamie is going through the motions at Sherringford, trying to finish his senior year without incident, with a nice girlfriend he can't seem to fall for. Charlotte is on the run, from Lucien Moriarty and from her own mistakes. No one has seen her since that fateful night on the lawn in Sussex—and Charlotte wants it that way. She knows she isn't safe to be around. She knows her Watson can't forgive her. Holmes and Watson may not be looking to reconcile, but when strange things start happening, it's clear that someone wants the team back together. Someone who has been quietly observing them both. Making plans. Biding their time. Someone who wants to see one of them suffer and the other one dead.

The Case for Jamie is a layered mystery, much like the previous books, led by a wonderfully intelligent and deeply flawed young woman and a young man looking towards a future without her, no matter how much he misses her.

Jamie, on the surface, is doing well. At school, in his social life. He has a girlfriend who likes him, who wants to be with him. He has friends he spends time with. But he can't shake what happened a year ago. He can't forget, seeing August Moriarty shot dead in front him, and some other things, even though he wants to so desperately. Charlotte is on the hunt for Lucien Moriarty. The crimes he's committed, the actions and plots and plans he's taken against her. She's ready to make him pay, ready to do what it takes to find him. Until her investigating takes her back to someone she isn't sure she should be around. Someone she'd rather be apart from in order to keep them safe from her. But when there's a mystery afoot, it can't be Holmes without Watson.

Both are stripped bare in this book, this time when they haven't seen each other in a year. Jamie's struggling to appear normal on the surface, he's used this last year to try and forget what happened to him and he can't. Charlotte's spent the year with herself, following and hunting. Thinking in the quiet. Remembering moments in her past, the moments that taught her about the world and about herself, about her parents and her brother. How her family would never be what she wanted. How she's still broken in a number of ways and how she copes around it. They're not always the best when they're together but they're miserable when they're apart, and it'll never be over when it's Holmes and Watson, not really. There's always something else out there, plotting against them, which is why I was rather delighted to discover that there'll be a fourth book in the series.

(I downloaded an e-book of this title from the library.)
Posted by Lindsay at 4:00 AM