Me on All Summer Long 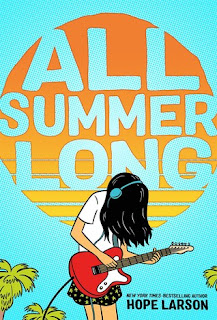 Thirteen-year-old Bina has a long summer ahead of her. She and her best friend, Austin, usually do everything together, but he's off to soccer camp for a month, and he's been acting kind of weird lately anyway. So it's up to Bina to see how much fun she can have on her own. At first it's a lot of guitar playing, boredom, and bad TV, but things look up when she finds an unlikely companion in Austin's older sister, who enjoys music just as much as Bina. But then Austin comes home from camp, and he's acting even weirder than when he left. How Bina and Austin rise above their growing pains and reestablish their friendship and respect for their differences makes for a touching and funny coming-of-age story.

All Summer Long is a moment in time, a summer of loneliness and discovery. For Bina, it's rather lonely, having a summer apart from her best friend, but there has to be something to do beyond eating chips and watching TV all the time.

Bina's fun and energetic. She loves music and playing the guitar, hanging out with her best friend Austin, and she's all ready to spend another summer with him finding out how much fun they can have. Keeping track of it all in their Combined Summer Fun Index. But on the last day of school before the summer, Austin puts the brakes on their plans because he's off to soccer camp. And he thinks they need to grow up a little. They are thirteen, after all. Once Austin's gone, Bina's a little lost. What she supposed to do? Summer reading? Watch loads and loads of British teen dramas online? Leave the house? What follows for Bina is a summer of exploration, of meeting new people, of getting to know people better, of learning some hard lessons, and of continuing to love something that already brought her enjoyment.

The art style fits with the story. There's something casual and summery about it. I rather enjoyed the expressions Hope Larson gave the characters, the frowns and the grumbles on Bina's face, the sneer's on Charlie's. The way the lyrics of the songs Bina listens to float across the page. There's something about Larson's art the brings Bina's story to life.

This is a sweet coming of age story about a girl who loves music and is still figuring out the world, figuring out the people around her and what she wants from life. What she's interested in, what she thinks she'll continue to be interested in. Things will change, as they always do, but the people close by, the ones who've always been there, will continue to be there. And as Bina gets older, as she learns and practices, whole new worlds will open up to her. I would recommend this to those middle-grade graphic novel readers looking for more stories about growing up and getting older while also being light-hearted.