Me on Ivy Aberdeen's Letter to the World 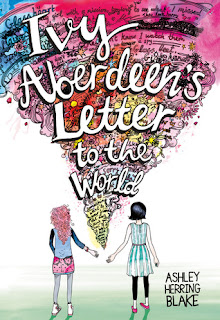 When a tornado rips through town, twelve-year-old Ivy Aberdeen's house is destroyed and her family of five is displaced. Ivy feels invisible and ignored in the aftermath of the storm--and what's worse, her notebook filled with secret drawings of girls holding hands has gone missing. Mysteriously, Ivy's drawings begin to reappear in her locker with notes from someone telling her to open up about her identity. Ivy thinks--and hopes--that this someone might be her classmate, another girl for whom Ivy has begun to develop a crush. Will Ivy find the strength and courage to follow her true feelings?

Ivy is a caring and creative girl, a notebook in one hand and a pencil in the other, ready to draw the world around her. Or at least how she sees in. Right now, her world is a little messy and scattered, but that's what happens when a tornado goes through town and smashes Ivy's house to bits. Especially when her family is already off-kilter with new babies to navigate around and an older teen sister she's not so sure about right now. Ivy has questions, questions about a bunch of things, but everyone around seems too busy or tired or angry. Then Ivy's notebook goes missing, the one with her drawing of two girls holding hands, and she starts wondering where it is. Who's seen it. Who's guessed Ivy's latest and most confusing secret: that she's got a crush on another girl.

There's a distinct lack of LGBTQ representation in middle grade, which is so unfortunate considering there are kids that young who are starting to wonder about why they feel certain ways. Why they don't have crushes on the same celebrities or classmates that their friends do. Why they don't have crushes at all. It makes me happy knowing that this book exists, that this book will be found by kids who have similar questions and feelings to Ivy's. That they'll read about Ivy and her family and know that that there's no right or wrong way to be but themselves, that there's always someone out there ready to support them and love them, and that they don't have to have everything all figured out right away. I would recommend this to so many people, to ten, eleven, and twelve-year-old kids, to teachers and librarians and parents who interact with kids every day, because there are bound to be kids like Ivy out there searching for themselves in the pages of a book.