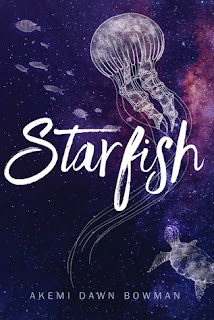 Kiko Himura has always had a hard time saying exactly what she's thinking. With a mother who makes her feel unremarkable and a half-Japanese heritage she doesn't quite understand, Kiko prefers to keep her head down, certain that once she makes it into her dream art school, Prism, her real life will begin. But then Kiko doesn't get into Prism, at the same time her abusive uncle moves back in with her family. So when she receives an invitation from her childhood friend to leave her small town and tour art schools on the west coast, Kiko jumps at the opportunity in spite of the anxieties and fears that attempt to hold her back. And now that she is finally free to be her own person outside the constricting walls of her home life, Kiko learns life-changing truths about herself, her past, and how to be brave.

Starfish is honest and raw, a look at a young woman struggling to find herself, find her place in the world, while it feels like nothing will work out.

Kiko is bright and creative, caring. But she's been beaten down after years of passive-aggressive comments and racist put-downs by her white mother, a woman who cares far more about herself and how others see her than her own children. She rarely says what she's thinking, instead retreating and hiding in her art. Art school will be Kiko's escape, her chance to be free. But then comes the rejection letter. Then comes the news that her uncle, a man who assaulted her when she was younger, is moving in with them, and there goes all of Kiko's hopes and dreams.

I found it so hard, emotionally, to read this. It was easy for me to feel for Kiko, to want the horrible people in her life to be better, to want her to leave them sooner to spare her any more emotional pain. But I couldn't. She had to learn, learn what her limit was, learn that it was okay to leave. Learn that some people will never change, no matter how many times they actually say the right things, because they will always go back to saying the wrong things. With a book this harsh and emotional, there were bound to be parts I didn't enjoy (like Kiko's mother), but without those people and those events, it wouldn't be the same book. It wouldn't be the same blisteringly honest book. I would definitely recommend this to readers looking for honest books, books that so accurately portray the struggle with anxiety and self-doubt.