Me on Foolish Hearts 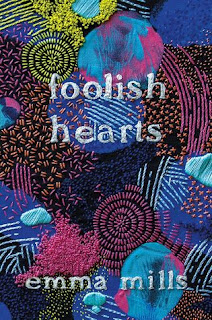 The day of the last party of the summer, Claudia overhears a conversation she wasn't supposed to. Now on the wrong side of one of the meanest girls in school, Claudia doesn't know what to expect when the two are paired up to write a paper—let alone when they're both forced to try out for the school production of A Midsummer Night's Dream. But mandatory participation has its upsides—namely, an unexpected friendship, a boy band obsession, and a guy with the best dimpled smile Claudia's ever seen. As Claudia's world starts to expand, she finds that maybe there are some things worth sticking her neck out for.

Foolish Hearts is all kinds of sweetness and kindness. It's the story of a girl who never expected to be involved in anything, who figured she'd continue to spend high school flying under the radar, until she overheard something she wasn't supposed to.

Claudia is okay with just being. She's fine with not being popular, with just being average. She's got a supportive family, a great best friend in Zoe. She's happy with who she is, with her place in the world. Until she overhears a rather personal break-up and is threatened by half of the former couple, demanding she keep quiet. What then follows is a string of unexpected and tense events, leading up to the two being forced to assist with the school's theatre production. It's there, in the auditorium and the costume room, and later on various houses and locations, that Claudia starts to branch out. Make new friends. But is she ready?