Me on Cucumber Quest 1: The Doughnut Kingdom 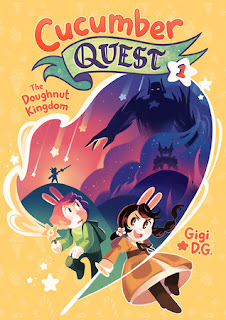 What happens when an evil queen gets her hands on an ancient force of destruction? World domination, obviously. The seven kingdoms of Dreamside need a legendary hero. Instead, they'll have to settle for Cucumber, a nerdy magician who just wants to go to school. As destiny would have it, he and his way more heroic sister, Almond, must now seek the Dream Sword, the only weapon powerful enough to defeat Queen Cordelia's Nightmare Knight. Can these bunny siblings really save the world in its darkest hour? Sure, why not?

Cucumber Quest Volume 1: The Doughnut Kingdom is the beginning of a fun but dangerous adventure to save the seven kingdoms of the world from an evil plot.

Cucumber is kind and quiet, ready to head off to school to learn as much as he can. But then he gets dragged into a plan to save the land from an evil queen. Why? Just because he's a boy? Why can't his sister Almond, who's desperate to become a knight righting wrongs and defeating evil, do it? Because she's a girl? Unfortunately, they're surrounded by adults who don't listen, and so both of them end up on a mission to save the world from an evil queen and her dreams of destruction.

The artwork is rather cute and fun, lots of bright colours. And lots of food puns with everyone's colouring and clothing being related to the food that makes up their name. Cucumber in green, Almond in brown, Sir Carrot in orange, and so forth. With everyone being some kind of bunny person, it makes it all rather fun and sweet to look at.

This certainly feels like the beginning of a journey for Cucumber and Almond, the start of a standard epic quest. And there are also jabs made at standard epic quests, like Cucumber being told to 'be a man' and him questioning why and Almond being told she has to be protected because she's the little sister, to show how those standard epic quests were often sexist and utterly ridiculous. It takes those clichés and flips them, tosses them aside. Little sisters can be knights. Knights can be afraid and run when they're desperately needed. It asks questions about why things are done in certain ways, why it has to be older brothers that protect, and goes about in different directions. But it feels very much like a beginning. There's a lot of establishing going on. I would definitely recommend this to middle grade readers, to kids looking for a new epic quest graphic novel with fun characters and without a lot of violence.