Hello there! Welcome to today's tour stop for the paperback release of Tara Sim's wonderful Timekeeper! 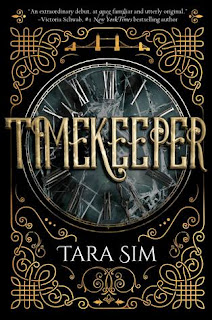 In an alternate Victorian world controlled by clock towers, a damaged clock can fracture time—and a destroyed one can stop it completely.

It's a truth that seventeen-year-old clock mechanic Danny Hart knows all too well; his father has been trapped in a Stopped town east of London for three years. Though Danny is a prodigy who can repair not only clockwork, but the very fabric of time, his fixation with staging a rescue is quickly becoming a concern to his superiors.

And so they assign him to Enfield, a town where the tower seems to be forever plagued with problems. Danny's new apprentice both annoys and intrigues him, and though the boy is eager to work, he maintains a secretive distance. Danny soon discovers why: he is the tower's clock spirit, a mythical being that oversees Enfield's time. Though the boys are drawn together by their loneliness, Danny knows falling in love with a clock spirit is forbidden, and means risking everything he's fought to achieve.

But when a series of bombings at nearby towers threaten to Stop more cities, Danny must race to prevent Enfield from becoming the next target or he'll not only lose his father, but the boy he loves, forever.

The stunning first novel in a new trilogy by debut author Tara Sim, Timekeeper is perfect for fans of Cassandra Clare and Victoria Schwab.

As this is a tour for Timekeeper's paperback release, it's a good chance to remember some of the nice things I said last year when the hardcover came out. For those interested, the full review can be found here.


Timekeeper is intriguing, enthralling, mysterious, and more than a little somber. It's a story about lonely souls and missing hours, of hope and love and selfishness... I was intrigued by the world-building here, by the need for advancement in clock mechanisms because of the changes to time. Because of time being something slightly tangible, something that can be reined in and controlled... I also liked how the author altered other parts of history, like this world's views of homosexuality. Danny isn't ridiculed or hated, but it's the default of most he comes across that, when they ask if he's seeing anyone, they assume he'd date a girl... As I read this I was struck by a sweet, melancholy tone that carried me along, rising and falling as Danny worked on the clock tower in Enfield and uncovered more and more behind the bombings and the Stopped towns. At times I chuckled and at times I wanted to cry. There were some interesting pokes and prods at a deeper mystery going on, one Danny brushes up against near the end, so I'm curious as to where the second book will go and what will be revealed.

To celebrate Timekeeper's paperback release, here's an excerpt from the eagerly anticipated (and not just by me!) sequel, Chainbreaker! 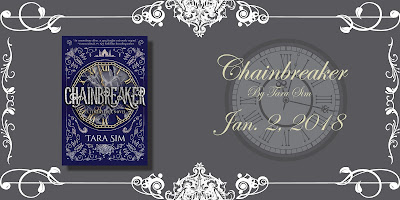 Daphne remained silent. She was painfully aware of standing between these two men—two sides of a war, two sides of her birth. There was a strangeness to her skin just then, as if it weren’t actually hers. She wanted to scratch at it, see if it would flake off and reveal something truer. Something in-between, something like a mark, that would determine what to say, what to think, what she was.

Also to celebrate, Thomas Allen & Son is holding a giveaway, the prize being a paperback copy of Timekeeper! Quick note that this giveaway is Canada only and ends on October 31. The full rules can be found in the widget.

Tara Sim can typically be found wandering the wilds of the Bay Area in California. When she’s not
chasing cats or lurking in bookstores, she writes books about magic, clocks, and explosives. Timekeeper is her debut novel. Follow her on Twitter at @EachStarAWorld, and check out her website for fun Timekeeper extras!

Thanks so so much to Thomas Allen & Son for arranging the blog tour and the giveaway. And thank you so much to Tara Sim for the sweetness that is Danny and Colton and Timekeeper. :)
Posted by Lindsay at 4:00 AM