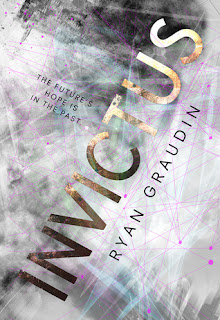 Farway Gaius McCarthy was born outside of time. The son of a time-traveling Recorder from 2354 AD and a gladiator living in Rome in 95 AD, Far's birth defies the laws of nature. Exploring history himself is all he's ever wanted, and after failing his final time-traveling exam, Far takes a position commanding a ship with a crew of his friends as part of a black market operation to steal valuables from the past. But during a heist on the sinking Titanic, Far meets a mysterious girl who always seems to be one step ahead of him. Armed with knowledge that will bring Far's very existence into question, she will lead Far and his team on a race through time to discover a frightening truth: history is not as steady as it seems.

Invictus is a twisted journey through time and space, a mystery within a mystery. A tale where time is now and then and will be, but unless they can figure out what's going wrong, it might never happen at all.

Far is determined, passionate. Focused on his goal, his dream of exploring history like his mother before him. But he's sometimes reckless, too bold for his own good. It gets him in trouble, into near-impossible to escape from situations. It gets him expelled, but it also gets him a ship that can travel through time. He can finally do what he's dreamed of, even if it involves being part of a black market group taking priceless artifacts from the past. It's time travelling, it's experiencing history. It's living. Until a stranger bursts in on his heist on the Titanic.

This is a curious, fast-paced story of history, complicated math, and the desire to live before dying. To do something meaningful and worthwhile. To see and breathe in history, to not waste life thinking about what ifs and could-have-beens. I don't know that I can say too much else, not knowing what's going on is part of the story, part of the reveal of what is happening to Far and his friends on their ship. If you're looking for a standalone book that's full of time travel and twists, full of impossibility and fate, then you'll probably enjoy this.