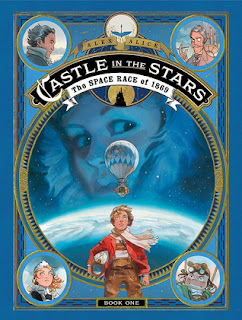 In search of the mysterious element known as aether, Claire Dulac flew her hot air balloon toward the edge of our stratosphere-and never returned. Her husband, genius engineer Archibald Dulac, is certain that she is forever lost. Her son, Seraphin, still holds out hope. One year after her disappearance, Seraphin and his father are delivered a tantalizing clue: a letter from an unknown sender who claims to have Claire's lost logbook. The letter summons them to a Bavarian castle, where an ambitious young king dreams of flying the skies in a ship powered by aether. But within the castle walls, danger lurks-there are those who would stop at nothing to conquer the stars.

Castle in the Stars: The Space Race of 1869 #1 is the beginning of an epic tale. It's a searching for the impossible, full of hopes and dreams and sorrow. It's a young boy missing his mother and willing to journey as close as he can to her.

Seraphin is a smart, lonely boy dreaming of the impossible. Of one day flying through the sky using aether, of continuing the work of his mother before her disappearance. His father is a practical man. He holds no illusions as to the fate of his late wife, but Seraphin still dreams. When the letter arrives, speaking of his mother's logbook, Seraphin knows they have to go. And so he and his father end up on an unexpected journey to a Bavarian castle full of secrets and wonder.

The art is wonderfully detailed. The delicate lines that make up the characters' faces, the buildings and castles. The blueprint of the aethership. And the landscapes, the train station and the castle's surrounding trees and mountains, look more like watercolour paintings. The beautiful artwork serves to enhance an already captivating story.

This is the start of something epic and wondrous. A journey through the skies, hopefully up into the stars. The practically and reasoning of science and real life colliding with the magical nature that is aether. I would certainly recommend this to kids interested in epic stories of science, impossibility, and steampunk-esque sensibilities.

(I received an e-galley of this title to review from First Second through NetGalley.)
Posted by Lindsay at 4:00 AM