Me on Mask of Shadows 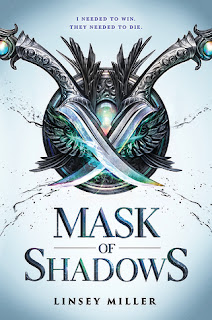 Sallot Leon is a thief, and a good one at that. But gender fluid Sal wants nothing more than to escape the drudgery of life as a highway robber and get closer to the upper-class—and the nobles who destroyed their home. When Sal steals a flyer for an audition to become a member of The Left Hand—the Queen's personal assassins, named after the rings she wears—Sal jumps at the chance to infiltrate the court and get revenge. But the audition is a fight to the death filled with clever circus acrobats, lethal apothecaries, and vicious ex-soldiers. A childhood as a common criminal hardly prepared Sal for the trials. And as Sal succeeds in the competition, and wins the heart of Elise, an intriguing scribe at court, they start to dream of a new life and a different future, but one that Sal can have only if they survive.

Mask of Shadows is thrilling and compelling, a tale of survival and revenge, of shaky alliances and unexpected truths.

Sal is a thief, but they're a determined thief. Willful, skilled but acknowledges that they have flaws and weak points. Maybe a little broken, a little lost and lonely. They're on a mission, they have a purpose. Revenge. To expose those who left Sal's homeland of Nacea a scorched ruin. But first, Sal has to make it through the audition, survive the plots and plans and poisons of their fellow hopefuls in order to make it to the top, The Left Hand of the Queen.

One important part of this story is that of Sal and their identity, their being gender fluid. In no way is this a coming out story. It's just how it is. Sal knows who they are, how they want to be addressed on certain days depending on what they're wearing or how they're feeling. Which is great to see, especially in fantasy. How Sal was accepted warmly (with the exception of a few who didn't care if they misgendered Sal) and how so much of the book's focus was Sal's revenge, their honing their assassination skills, and their struggle to survive to the end.

What is revenge? For Sal, it's important. It pushes them forward, drives them, but at times it blinds them. More than one plot is circling, and there are those besides Sal that might want to change things in Igna. This is a rather dangerous, rather complicated tale of a young thief looking for revenge and those around them, those who help and those who hinder. I would definitely recommend this to those looking for something different and diverse in fantasy, in a land drained of magic but rich in secrets and shadow.

(I received an e-galley of this title to review from Sourcebooks through NetGalley.)
Posted by Lindsay at 4:00 AM