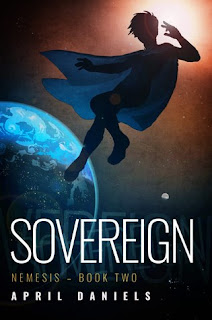 Only nine months after her debut as the fourth superhero to fight under the name Dreadnought, Danny Tozer is already a scarred veteran. Protecting a city the size of New Port is a team-sized job and she's doing it alone. Between her newfound celebrity and her demanding cape duties, Dreadnought is stretched thin, and it's only going to get worse. When she crosses a newly discovered supervillain, Dreadnought comes under attack from all quarters. From her troubled family life to her disintegrating friendship with Calamity, there's no trick too dirty and no lever too cruel for this villain to use against her. She might be hard to kill, but there's more than one way to destroy a hero. Before the war is over, Dreadnought will be forced to confront parts of herself she never wanted to acknowledge. And behind it all, an old enemy waits in the wings to unleash a plot that will scar the world forever.

Sovereign is rough and dangerous, a near-constant battle for Danny. A battle to save the world, to prove something to those who look down on her. To confront her past and to free herself from it. To survive.

After battling Utopia, Danny has sort of settled into being a superhero. She's patrolling, taking down criminals and villains. She has a love-hate relationship with the media, she's trying to distance herself even more from her parents, and things are really awkward and strained with Calamity. Maybe it's not the best, but things are going okay. Danny's alive, in the female body she's always wanted and superpowers flowing through her. Making her feel powerful. But is that enough?

So much of what happens in this book to Danny is a punch to the gut, to the heart. She just wants to belong, to finally belong, but there are so many factors trying to push her into spaces she doesn't want to be in. Her parents, those who don't see her as a viable superhero because of her age, those who don't want a transgender superhero. Those who want to rule the world like a dictator with an iron fist, who want to control with power while those without would live in servitude. Danny's own demons, her nightmares and her childhood traumas and her issues that she doesn't always want to face. If you enjoyed the first book, you'll surely enjoy this second book.

(I received an e-galley of this title to review from Diversion Books through NetGalley.)
Posted by Lindsay at 4:00 AM