Me on Amid Stars and Darkness 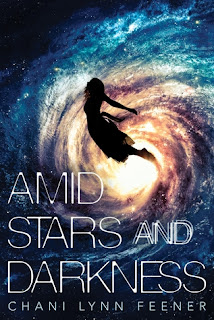 Delaney's entire world is thrown into chaos after she is mistaken for Lissa Olena, an alien princess hiding out on Earth in order to escape an arranged marriage. Kidnapped by the princess's head bodyguard, Ruckus, and imprisoned in an alien palace, Delaney is forced to impersonate the princess until Olena can be found. If she fails, it will lead to an alien war and the eventual enslavement of the entire human race. No pressure or anything. Factor in Trystan, the princess's terrifying betrothed who is intent on unraveling all her secrets, and her own growing feelings for Ruckus, and Delaney is in way over her head.

Amid Stars and Darkness is full of danger, of secrets and lies. Caught up in intergalactic intrigue and assassination attempts, Delaney struggles to keep her wits about her and to not let anyone know who she really is.

Delaney is a victim to circumstance after happening across a stranger in a club and being a similar height and body shape. Because what happens next is Delaney is taken from Earth to an alien ship, somehow looking like and being treated like a runaway alien princess. She's annoyed, afraid, angry. She's a regular girl, just finished with high school. She's in no way ready or capable to deal with anything like this. I was impressed by her restraint. She doesn't hide the fact that she's furious that Olena put her in this position, that she's being forced to pretend to be Olena until they find her, that someone's trying to kill her. But she doesn't necessarily completely break down screaming. She's pissed while seeing that she has to go along with it so a massive war that could doom Earth won't break out.

There were some parts of this that were interesting, some moments with Delaney that showed she could be both angry and her situation and understanding of the seriousness, but for the most part it felt rather predictable. Considering the summary and the set up, the plot happened how I thought it would. Some characters stayed the same, consistently arrogant or foolish. Nothing really surprised me. I'd hoped for some more science fiction, some more exploration as opposed to aliens who mostly looked human and barely any exploration on the planet Delaney ends up on. In the end, this wasn't the book for me. That being said, I'm sure there are those who would enjoy this, those looking for more romance in their sci-fi.