Me on The Name of the Blade 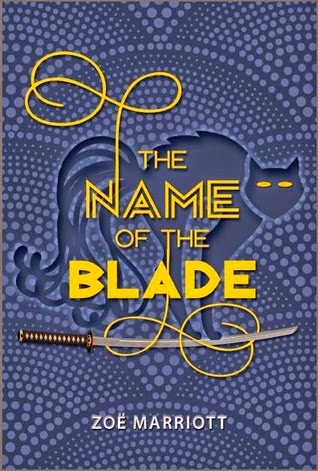 When Mio sneaks the family's katana -- a priceless ancestral sword -- from her parents' attic, she just wants to spice up a costume. But the katana is much more than a dusty antique. Awakening the power within the sword unleashes a terrible, ancient evil onto the streets of unsuspecting London. But it also releases Shinobu, a fearless warrior boy, from the depths of time. He helps to protect Mio -- and steals her heart. With creatures straight out of Japanese myths stalking her and her friends, Mio realizes that if she cannot keep the sword safe and learn to control its legendary powers, she will lose not only her own life... but the love of a lifetime.

The Name of the Blade is thrilling, mysterious, exciting, and dangerous. Mio unearths something secret, something meant to be hidden away, and she's the only one who can stop it.

I rather like Mio as the heroine. She takes it all in, even though she has to or else she'll get killed. When the Nekomata comes after her, when Shinobu appears from the katana, she takes it all in with some "what in the world am I supposed to do now, I'm only fifteen" and some secret ancient Japanese power. She's not the boldest girl, and she doesn't have a killer instinct kind of mentality, but she has her strengths. Her welcoming personality, her understanding that none of what happens next will be a game. She takes it all rather seriously.

The friendship/relationship Mio has with Jack is the best. They support each other, they keep the other grounded, but it's not all blind faith and acceptance. Jack pushes back at Mio. It's the kind of friendship with unyielding support and also one where they challenge each other to do better, to be better. It's an honest friendship.

One of my main reasons for reading this book is the Japanese history and mythology. I was intrigued as to how it would appear, how it would impact Mio and her actions later on. I found it to be rather mysterious but also rather present, if that makes sense. There's magic and voices only few can hear, but there's the sword and what it does to Mio, there's Shinobu, there's the Kitsune and the Nekomata. Some of the conflict is internal, Mio warring over what to do next, but a fair amount of it is external. Which was exciting to read about, Japanese mythology and creatures against the backdrop of 21st century London.

I've been waiting to read this for so long and it didn't disappoint. Japanese mythology, the UK setting, magic swords and cat demons. But after reading it I wanted desperately to know what happened next. Who's controlling the Nekomata? Where did the sword really come from? What is the connection between Shinobu and Mio? The book takes place of a short period of time, and that barely scrates the surface of what's been going on for centuries. What the katana realls is. What the Yamato family has been hiding. I only hope it doesn't take too long for the nest two books to come out here.

(I borrowed a copy of this title from the library. Note that this is a review of the North American release. The UK release, titled The Night Itself, came out on July 4, 2013 and was published by Walker Books.)
Posted by Lindsay at 6:00 AM