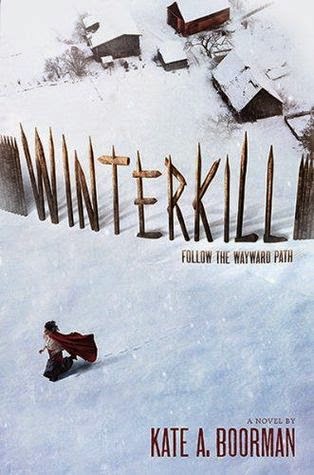 Emmeline knows the woods outside her settlement are forbidden. The mysterious enemy that wiped out half her people lurks there, keeping them isolated in an unfamiliar land with merciless winters. Living with the shame of her grandmother's insubordination, Emmeline has learned to keep her head down and her quick tongue silent. When the settlement leader asks for her hand in marriage, it's a rare opportunity to wash the family stain clean, even if she has eyes for another. But before she is forced into an impossible decision, her dreams urge her out to the woods, where she finds a path she can't help but follow. The trail leads to a secret that someone in the settlement will kill to protect. Her grandmother went down that path and paid the price. If Emmeline isn't careful, she will be next.

Winterkill is atmospheric and chilling, secretive and haunting. It's a journey of discovery and self-discovery, what's beyond the walls out in the woods and what is inside Emmeline. What is she capable of? What will she discover? And how will the Settlement react?

Emmeline is curious. She has a number of questions about her life in and around the Settlement. Other people have questions as well. What are her plans? What does her future hold? Will she stay on the right path, or will she turn Wayward like her grandmother did? But Emmeline's questions go further. What's beyond the Settlement? Where are the Lost People? She wants to know more about what else is out there, she wants to know the truth, but no one else is interested in that. The Settlement is safe, so why would anyone leave or break the rules? She has moments of strength and weakness, moments of doubt and conviction. But she never gives up on searching for the answers to her questions.

Discovery is one of the main tenants of the Settlement, yes, but only the right kind of discovery. Only the kind that benefits everyone, the kind that will keep them alive during the long winter months. Not the kind that asks questions about the past. Nothing good comes from remembering old hurts and scandals. But sometimes you just have to know what else is out there.

As with most books I was intrigued by the world-building. It has a very pioneer/old-fashioned pre-electricity feel, the way they live off the land in a village-style of settlement, but it also felt like it could be set in the distant future, after civilization as we know it has crumbled. Also the mix of English and French spoken by the villagers was interesting. The book has a very historical feel with hints of an old world kind of magic. I found the setting to be chilling and suspicious, perfect for the story.

Going in, I wasn't sure if there would be more to follow. Then I found out this is the first in a trilogy and was instantly excited. I found that the story moved slowly, but it was the good kind of slowly. The right kind. I felt rushed when Emmeline felt rushed, when she was running, searching, panicking about what was chasing her and who would be waiting for her when she got back. I would definitely recommend this to fans of Sorrow's Knot by Erin Bow and The Forest of Hands and Teeth by Carrie Ryan.

(I received an advance copy of this title from the author.)
Posted by Lindsay at 6:00 AM