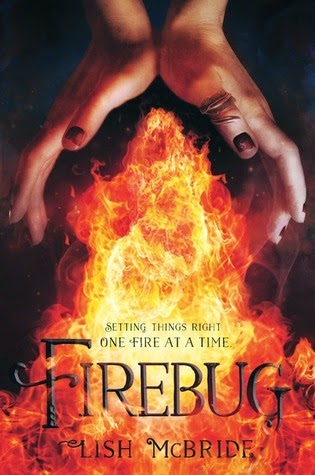 Ava is a firebug—she can start fires with her mind. Which would all be well and good if she weren't caught in a deadly contract with the Coterie, a magical mafia. She's one of their main hitmen... and she doesn't like it one bit. Not least because her boss, Venus, killed Ava's mother. When Venus asks Ava to kill a family friend, Ava rebels. She knows very well that you can't say no to the Coterie and expect to get away with it, though, so she and her friends hit the road, trying desperately to think of a way out of the mess they find themselves in. Preferably keeping the murder to a minimum.

Firebug is dangerous and exciting. It's a thrilling journey all about friendship, survival, and family, about keeping those you care about safe and doing whatever it takes to keep them alive. No matter who it pisses off.

Ava is an awesome anchor for the story. She's a curly-haired mess of sass, snark and fire, and she's loyal to a fault. It's all about family with her, after her mother's death. She fumbles a bit when it comes to normal, like boyfriends and a social life, but she's who you want in your corner. She's who you want in your life, caring about you, because she'll protect you. Even if it's something stupid like leaving, hoping they'll come after her instead.

The best part of this book for me is the Ava/Lock/Ezra friendship. It's just awesome. Sure, it's sort of built on an evil Coterie-shaped foundation, but it's still awesome. All three have their quirks, the chips on their shoulders, but that doesn't really matter. There's an understanding between the three of them. Affection. Companionship. The realization that they're all stuck in the same stupid ship with Venus as the evil captain sailing them to their doom. All three of them have very different personalities so there are those moments of clashing and crashing together, but it all still works.

There certainly is some interesting world building going on in this book like with the author's previous books. It's sort of like magical realism but maybe a bit more paranormal/horror with real life problems. Maybe being hitmen for a crime family-esque society doesn't count, but everything else does. Friends and family, pressure at work, romance and a social life. Loyalty and duty.

This book is patented Lish McBride. It's dark, it's full of snark. It's clever, exciting, and extremely dangerous, especially if you're the flammable type. It's a compelling combination of humour, horror, and punch-em-up action, and I'm desperate to find out what happens next.