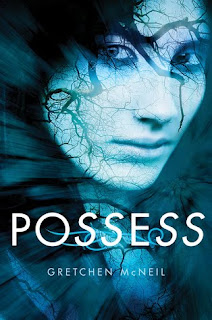 Bridget Liu wants to be left alone. Left alone by her mom, by the cute (but annoying) son of a local police officer, by the eerie voices she can suddenly hear. Unfortunately, the voices are demons, and Bridget has the rare ability to banish them back to Hell. Terrified to tell people, she confides in a priest who uses her to assist in cases of demonic possession. But when she is given a message, she has to unlock the secret to their plan before someone winds up dead, or before she becomes the next host.

I adore Bridget, she's spunky and feisty and has that teenage attitude, and the fact that she's half-Chinese and half-Irish is refreshingly new. How often do you see that? (But to be honest, one of my cousins is half-Caucasian and half-Korean) And the way she's described makes her sound so striking so I'm not surprised there are some guys who flock to her, like Peter (in a creepy stalker way) and Matt (in a less creepy just keeping an eye out for her after her dad was killed sort of way). She doesn't need help, she wants to be left alone, but when strange things happen, it's possible she'll need to suck it up and take the hand that's offered.

What drew me to this book, besides the gorgeous cover, was the exorcism aspect. It wasn't so much the roots in religion and what Bridget learns in terms of why she has this ability to hear the demons' voices but more that I haven't yet come across a YA novel that reminds me of the film The Exorcist (no pea soup, which is nice). A much-enjoyed twist on religion, on God and the Devil.

The pacing was excellent. One of the best compliments you can give an author is 'I wasn't bored when reading your book,' and I wasn't bored when reading Possess. There was a amazing mix of Bridget being confused and scared out of her mind of the demons, then her friends and family, then confusion at what her power is, then more action and creepy dolls, then more normal, then more creepy, then massive climax and an awesome ending.

Bridget needed to get past her father's death, needed to come to terms with both it and the powers she suddenly had, and if that meant she had to learn, to go deeper, to put herself in danger, then that's what she was going to do. As long as her family was safe, as long as she got answers, as long as she found out what was happening to her, that's what mattered. Even if it's dangerous.

Twisted and creepy and intriguing, Gretchen McNeil's debut novel fulfilled all me expectations and gave me exactly what I wanted, a prickly and confused heroine who wants answers when the secrets start to build, a girl who must learn to come into her own or die in the process.
Posted by Lindsay at 12:02 AM