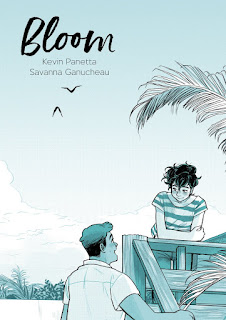 Now that high school is over, Ari is dying to move to the big city with his ultra-hip band―if he can just persuade his dad to let him quit his job at their struggling family bakery. Though he loved working there as a kid, Ari cannot fathom a life wasting away over rising dough and hot ovens. But while interviewing candidates for his replacement, Ari meets Hector, an easygoing guy who loves baking as much as Ari wants to escape it. As they become closer over batches of bread, love is ready to bloom... that is, if Ari doesn’t ruin everything.

Bloom is tender, sweet, and honest. It's a post-high school coming of age graphic novel all about wants and needs, dreams and real life, choices and consequences. It's about two young men, one who doesn't know what he wants and one who needs a little time away from life, and their summer together.

Ari doesn't know what he wants to do, not really. There's what he knows, what he was pushed towards, which is his family's bakery, which he doesn't really want to work at, and there's what he dreams of, which is moving to a bigger city with his friends and bandmates and making it as musicians. He's hoping it'll all work out, but with the bakery struggling and his dad pressuring him to stay, and his friends making serious plans while Ari dreams and hangs around, it's not looking likely. His confusion and uncertainty overwhelm him. He doesn't know where to go, what to do. But he does know that he likes spending time with Hector.

Hector is on a break from culinary school, currently unattached after breaking up with his last boyfriend, and is in town to help clear out his late grandmother's house. He knows what he loves, cooking, baking, spending time in the kitchen making food, but he needed some time away. Time to breathe. So here's this little town, with a bakery looking for help. So in walks Hector, looking to continue doing what he loves.

The story fits so well with the art style and the two-tones colour scheme. I love Savannah Gancheau's art in this book. The exterior scenes so full of things, like the house/bakery backyard with all the pots and plants. The pages covered in baked goods, rolls and cakes and blueberry muffins. The characters' faces! They're all so expressive, smiling or sneering, frowning or shouting or laughing. Especially Ari's annoyed face. Those eyebrows!

Ari and Hector's story isn't easy. It has its ups and downs, its fun times and tense moments. This is a story all about moving on when you don't feel like you're ready, making hard decisions, facing a harsh reality when running a small business, admitting you made a mistake, apologizing and owning up to it when that mistake got people hurt, and moving forward when you're afraid of screwing up again. And it's a story about how the people who care about you will always be there to stand by your side. So, if you're looking for a sweet, realistic story with diverse characters and wonderful art, give this a read. Just don't blame me if you're hungry at the end.