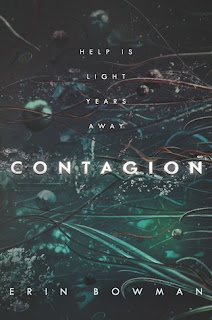 After receiving an urgent SOS from a work detail on a distant planet, a skeleton crew is dispatched to perform a standard search-and-rescue mission. But when the crew arrives, they find an abandoned site, littered with rotten food, discarded weapons… and dead bodies. As they try to piece together who—or what—could have decimated an entire operation, they discover that some things are best left buried—and some monsters are only too ready to awaken.

Contagion is eerie and mysterious, a story that takes place in the darkness of space on an isolated planet, where help is nowhere to be found and the shadows twitch. A place where secrets thrive. A place where something lurks down in the dark, waiting to get out.

Thea Sadik is an intern with promise, her whole future ahead of her. She's just looking for the right opportunity that will get her noticed by a big company. University, a career. A future away from her foster home. Nova Singh is a pilot looking to get her wings back, looking to prove herself in order to get a job travelling through the stars. For now, she's sort of stuck, but she's still piloting. Maybe after this evacuation and rescue mission, the company will hire her on permanently. Since the armed forces won't go anywhere near her. Unfortunately for Thea and Nova, the rescue isn't what they expected, and the site they arrive at isn't what they thought they'd find. Frozen-over samples, powered-down computers. Dead bodies. And a secret that's haunted for decades.

It's a rather intriguing story. It reads like an atmospheric sci-fi horror movie, something like Resident Evil or Pandorum or Alien. There's the story here, the rescue and all the death and the fight to survive, but I get the feeling there's a bigger story coming in the next book. One that will involve the company, the Union, and the future of humanity. It certainly kept me reading, certain events that unfolded and the idea of what will happen next. If you're a fan of quick reads, of sci-fi and creepy stories, of shadows and monsters and secrets, then you might want to give this a read.