Me on Not Now, Not Ever 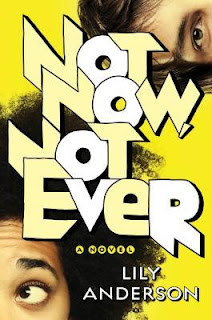 Elliot Gabaroche is very clear on what she isn't going to do this summer. She isn't going to stay home in Sacramento, where she'd have to sit through her stepmother's sixth community theater production of The Importance of Being Earnest. She isn't going to mock trial camp at UCLA. And she certainly isn't going to the Air Force summer program on her mother's base in Colorado Springs. As cool as it would be to live-action-role-play Ender's Game, Ellie's seen three generations of her family go through USAF boot camp up close, and she knows that it's much less Luke/Yoda/"feel the force," and much more one hundred push-ups on three days of no sleep. And that just isn't appealing, no matter how many Xenomorphs from Alien she'd be able to defeat afterwards. What she is going to do is pack up her attitude, her favorite Octavia Butler novels, and her Jordans, and go to summer camp. Specifically, a cutthroat academic-decathlon-like competition for a full scholarship to Rayevich College, the only college with a Science Fiction Literature program. And she's going to start over as Ever Lawrence, on her own terms, without the shadow of all her family's expectations. Because why do what's expected of you when you can fight other genius nerds to the death for a shot at the dream you're sure your family will consider a complete waste of time? This summer's going to be great.

Not Now, Not Ever is clever and fun, the story of a teenager trying to escape to and find her place in before time runs out. But events never happen as they're planned out.

Elliot's looking for a place to escape to. A place where she doesn't have to worry about what other people want from her, what they expect her to do in the future. What about what she wants to do? Sure, the Air Force is in her family, but she's not exactly sure if she wants to enlist. So she takes a chance when she gets it, heading off to a somewhat stress-filled academic competition in order to win a scholarship to a college she'd love to attend. Not just because it's not the air force or pre-law, but because it could mean studying science fiction. But the camp is far more tense and competitive than she thought it would be, and her campmates are far weirder than she'd expected.

This book is fun, it had moments of genius teen snark and attitude, nerdy pop culture references, and teenage romance. I'd never read Wilde, so while I did look up the plot of the play beforehand, I imagine there were a few The Importance of Being Earnest references that I missed. It was nice to read another Lily Anderson book, to read about characters having abstract or geeky interests and acting like real people with flaws, dreams, and heaps of confusion. While I didn't necessarily like this one as much as the first book, this was still enjoyable.

(I downloaded an e-galley of this title from Wednesday Books through NetGalley.)
Posted by Lindsay at 4:00 AM