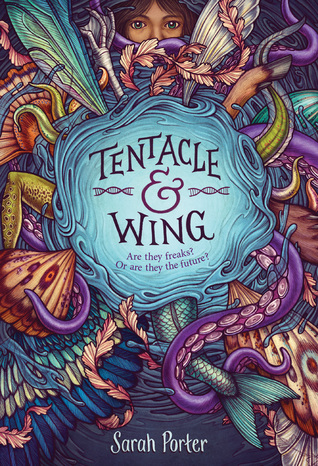 Twelve-year-old Ada is a Chimera, born with human and animal DNA thanks to a genetic experiment gone wrong. Because being a “kime” is believed to be contagious, she has kept her condition—complete with infrared vision—hidden. But a surprise test outs her, and Ada is shipped off to a quarantined school for kimes.

There Ada meets kids of many different shapes, stripes, and appendages, such as a girl with dragonfly wings and a seal-boy. As she adjusts to her new life, Ada senses that the facility is keeping a secret that could upend everything the world knows about Chimeras. But will someone put a stop to her efforts to uncover the truth?

Ooooo, intriguing-sounding middle grade. I sounds like a mash-up of The Girl Who Could Fly and Monstrous, about kids with differences and monsters and secrets. Considering it's written by Sarah Porter, I wonder how dark it'll be. Vassa in the Night was pretty dark, but it's also YA.
Posted by Lindsay at 12:02 AM