Me on The Strange Maid 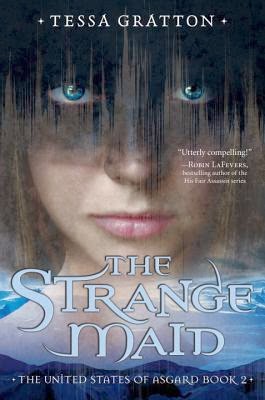 Signy Valborn was seven years old when she climbed the New World Tree and met Odin Alfather, who declared that if she could solve a single riddle, he would make her one of his Valkyrie. For ten years Signy has trained in the arts of war, politics, and leadership, never dreaming that a Greater Mountain Troll might hold the answer to the riddle, but that's exactly what Ned the Spiritless promises her. A mysterious troll hunter who talks in riddles and ancient poetry, Ned is a hard man to trust. Unfortunately, Signy is running out of time, and she and Ned take off across the ice sheets of Canadia to claim Signy's destiny.

The Strange Maid is an epic journey if there ever was one, a journey through destiny and fate, through riddles and dreams. The journey of one girl racing toward a battle that could change everything.

Signy searches for an answer to a riddle she can't solve on her own, a riddle that speak of her destiny. There is no part of her that doesn't not want to be a Valkyrie, but like a Valkyrie of old. A warrior, one of power and strength, of doing battle against enemies. But that's not what a Valkyrie does anymore, not so much, and it seems to bother her. There is a core of strength and fire that runs through Signy, and it felt more and more that not being like a Valkyrie of old, a death maiden, a strange maid, would be wrong.

I find Ned to be rather interesting. Like Signy, I'm curious about him. Where he comes from, what his secrets are. Why he seems to speak the truth but in riddles. It's also interesting thinking about what's said as truth, what Signy believes to be true, and what Signy knows is true. How trust works, how we decide who to trust for different reasons.

I love the world-building, the alternate Norse mythology-centric world, the gods and goddesses, the epic tales of heroes and monsters. This felt different than the previous book. Deeper into the mythology, darker. The thrill of battle and revenge, the purpose behind a sacrifice, the mournful wails and knife-sharp pain of death. The allusions to Beowulf and the epic feel of Signy's journey.

Gratton's writing is filled with story and description, nothing unnecessary given and nothing important left behind. I would recommend reading The Lost Sun before this, though, the two are connected in some ways. Even though the book takes place over the course of some months, it felt like no time had passed from beginning to end. When I reached the last page, I wished it wouldn't end, that the journey would continue. That I could read more about Signy Valborn, the strange maid.

(I received an e-galley of this title to review from Random House through NetGalley.)
Posted by Lindsay at 6:00 AM