And now I'm back after taking a week off. Sort of. I've been rereading and spending time with family and having a birthday and seeing friends again.

I always think of doing one of those year in review posts, or one of those books I'm looking forward to in the coming year posts, but I never do it. Probably because I don't want to bore you with another list like most people seem to post around this time of year. Books I loved from 2013? The Dream Thieves, Ink, Fangirl, Scarlet, Vicious, and Asunder. Books I'm looking forward to in 2014? The next Raven Boys book, The Winner's Curse (which is sort of cheating because I've already read it), Cress (more cheating), The Inventor's Secret, Infinite, Rain, Illusive, Otherbound, Fiendish, and Isla and the Happily Ever After. :)

With the new year starting soon, I imagine I'll be getting to work on May's Canadian YA Lit Event. Any Canadian authors you'd like to see featured? Maybe some debut authors? I (currently) only know of 4: E.K. Johnston (The Story of Owen), Danielle L. Jensen (Stolen Songbird), Juliana Stone (Boys Like You), and Michelle Krys (Hexed).

I started keeping track of how many books I buy over the years. This year's number was down from last years. Possibly because I've gotten particular, or because I borrowed a lot from the library.

Do you plan out what your last read of 2013 and your first read of 2014 will be? I have. My last of 2013 will be Shadowplay by Laura Lam (because Pantomime was wonderful) and my first of 2014 will be The Inventor's Secret by Andrea Cremer (because there's a secret clockwork part of me that loves the idea of steampunk). :)

Remember how I said reviews would be coming back on the 31st? Yeah... I meant the 3rd. ;) So come back next Friday for a review of Pantomime by Laura Lam. :) 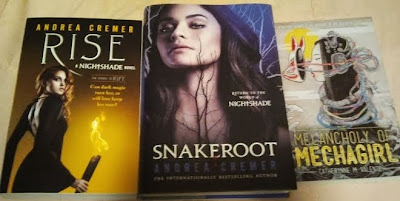 Borrowed from the library:
Racing Savannah by Miranda Kenneally
Posted by Lindsay at 8:00 AM