Me on The Storyteller 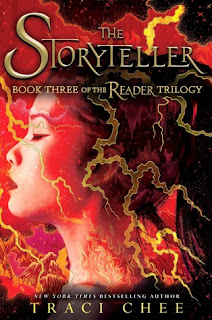 Sefia is determined to keep Archer out of the Guard's clutches and their plans for war between the Five Kingdoms. The Book, the ancient, infinite codex of the past, present and future, tells of a prophecy that will plunge Kelanna in that bloody war, but it requires a boy—Archer—and Sefia will stop at nothing to ensure his safety. The Guard has already stolen her mother, her father, and her Aunt Nin. Sefia would sooner die than let them take anymore from her—especially the boy she loves. But escaping the Guard and the Book's prophecy is no easy task. After all, what is written always comes to pass. As Sefia and Archer watch Kelanna start to crumble to the Guard's will, they will have to choose between their love and joining a war that just might tear them apart.

The Storyteller is a sweet and sorrowful end to a series, a world, full of life, death, and the magic of stories.

As with most final books, I find it hard to talk about it on its own for fear of giving away too much to those who haven't read the previous books. On its own, The Storyteller is an ending, it is the conclusion Sefia and Archer have been both running towards and running away from. It is the truth revealed by the Book, it is the war coming to an end. It is an inescapable ending, no matter how hard some try to run or avoid or change the future. Everything is already written down, between the covers of the Book. As a whole, the trilogy is enchanting and expansive, journey after journey, secret after secret. Memory after memory. It feels like a puzzle to be solved that has no true answer. It's an exploration of destiny and fate and the power of words both spoken and written.

All three books are a joy to read, to fall into and follow the characters on their paths, when they don't know where they're going and when they're racing towards somewhere they know they don't want to be. I see the wonder and power of storytelling in these books, journeys easy and hard, endings happy and bittersweet, revelations infinitely small and impossibly large. I would definitely recommend this series to those looking magic and adventure, a little mystery or puzzle here and there, and the everlasting battle between fate and free will.