Me on Honor Among Thieves 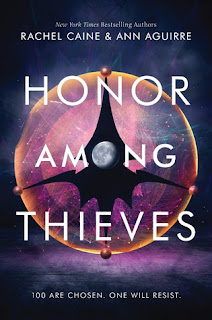 Petty criminal Zara Cole has a painful past that's made her stronger than most, which is why she chose life in New Detroit instead moving with her family to Mars. In her eyes, living inside a dome isn't much better than a prison cell. Still, when Zara commits a crime that has her running scared, jail might be exactly where she's headed. Instead Zara is recruited into the Honors, an elite team of humans selected by the Leviathan—a race of sentient alien ships—to explore the outer reaches of the universe as their passengers. Zara seizes the chance to flee Earth's dangers, but when she meets Nadim, the alien ship she's assigned, Zara starts to feel at home for the first time. But nothing could have prepared her for the dark, ominous truths that lurk behind the alluring glitter of starlight.

Honor Among Thieves is tense and action-packed, a story of unexpected journeys and encounters. It's full of secrets and deception, it withholds information, which isn't going to work on a take-charge girl like Zara. It's a future where humanity was saved but the cost was unknown.

Zara is hard and rough after living in the Lower Eight, a grimy section of New Detroit full of crime and drugs and all kinds of danger. But she's not stupid. There are reasons why she stayed, why she didn't go with her mom and sister to Mars. She's smart, tough, she knows when to strike and when to run. And now she needs to run, needs to keep away from anyone she cares about in order to keep them safe. Until she was recruited by the Honors, until she was given the chance to leave the planet and explore the universe. But it's possible that the universe isn't as safe as Zara was told it was, and knowing Zara, she's ready to find out the truth and fight back.

Nadim was interesting, this curious consciousness of a living spaceship. This lonely and worried personality that certainly wasn't expecting Zara to be one of his new Honors, or the accompanying Beatriz. But they're all together now, trying to navigate through space and missions and who Nadim is behind all the consoles.

I was consistently intrigued by the premise as the book went on. By the Leviathan and their mission, by what was said and what was kept secret. By Zara's quickfire actions and decisions, by her anger that she acknowledged and took the time to work through. It was definitely different than what I'd expected, but in a good way. I found myself racing toward the ending, wanting to know what would happen next. For those who enjoyed sci-fi YA books like Illuminae and Defy the Stars, I'd recommend giving this a read.