Me on The Stone Heart 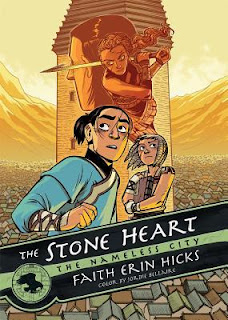 Kaidu and Rat have only just recovered from the assassination attempt on the General of All Blades when more chaos breaks loose in the Nameless City: deep conflicts within the Dao nation are making it impossible to find a political solution for the disputed territory of the City itself. To complicate things further, Kaidu is fairly certain he's stumbled on a formula for the lost weapon of the mysterious founders of the City... But sharing it with the Dao military would be a complete betrayal of his friendship with Rat. Can Kai find the right solution before the Dao find themselves at war?

The Stone Heart is surrounded in secrets, the search for peace and the search to claim.

Kaidu and Rat are in a little bit of a lull. They helped rescue the General of All Blades from an assassination attempt, but that doesn't mean things are perfect. Kaidu still wonders about the training he and the other Dao children go through every day, how the Dao are trained to be soldiers. But he doesn't really agree. Rat is still skeptical of anyone who isn't part of the monastery that helped raise her after her parents were killed. Except Kaidu, he's earned her trust by saving her. But it makes her forget that he's Dao, that he's part of the people that came and conquered the city. The General of All Blades has promised a that a council be formed, that all cultures and groups that make up the Nameless City be given a chance to have a say in how the city is governed, but not everyone wants this to happen.

The artwork is rather expressive, Kaidu's contemplative face and Rat's urgency. The fight scenes, the running and the searching. The wide landscapes are detailed, highlighting the size of the city. So many people live there, and all will be impacted by certain expected and unexpected events.

I definitely think this book, like its predecesor, say a lot about home and place. What is your home? Where are you from? Is it the place you were born, or your people's place of origin? Especially for Kaidu, who doesn't think he'll ever understand that Dao should be warriors. Especially for Rat, whose parents were killed and was raised an orphan of the city. Especially for Erzi, the son of the General of All Blades, who is Dao but born in the Nameless City. He's always seen the city as his, his to rule. But is the city really his? Can anyone own a city like the Nameless City? Does it belong only to the people who built it, or to all those that call it home?