Hi all! It snowed this week, which was horrible. But barely, so it's all good.

So we celebrated Christmas on Friday, which is more low key than it was when I was a kid. We're a small family. Things were a bit more exciting with Lucy running around like a crazy puppy, eating new treats and trying to stick her nose into the wrapping paper, but it was most of the same. Then came my birthday, which was smaller as my new laptop from earlier in the fall was an early present. But it was all good. Having fun, eating food (we had a ham this year for Christmas dinner), and watching the traditional Boxing Day hockey games. ;)

I'm thinking of shifting things a little bit in the new year, maybe moving Tuesday reviews to Monday and taking part in TTT more often. Thoughts? Any suggestions of backlist books to check out?

Reviews will start back up on Friday with Passenger by Alexandra Bracken. :) 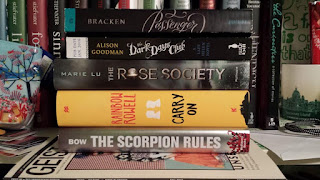