Me on A Pocket Full of Murder 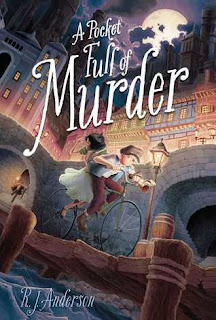 In the spell-powered city of Tarreton, the wealthy have all the magic they desire while the working class can barely afford a simple spell to heat their homes. Twelve-year-old Isaveth is poor, but she's also brave, loyal, and zealous in the pursuit of justice—which is lucky, because her father has just been wrongfully arrested for murder. Isaveth is determined to prove his innocence. Quiz, the eccentric eyepatch-wearing street boy who befriends her, swears he can't resist a good mystery. Together they set out to solve the magical murder of one of Tarreton's most influential citizens and save Isaveth's beloved Papa from execution. But each clue is more perplexing than the next. Was the victim truly killed by Common Magic—the kind of crude, cheap spell that only an unschooled magician would use—or was his death merely arranged to appear that way? And is Quiz truly helping her out of friendship, or does he have hidden motives of his own? Isaveth must figure out who she can trust if she's to have any hope of proving her Papa's innocence in time. . .

A Pocket Full of Murder is layered, smart, and wonderfully magical. This is a tale of a bright new heroine in a magical city of secrets, her relationship with her family, and her mystery hunting with a curious new companion. The truth must be discovered, but will it happen in time?

Isaveth is a brave girl, a determined girl. Determined to help her family, to discover the truth, to protect her siblings. The different kinds of relationships she has with her siblings are honest and realistic, as is the unwavering father she has in her father. As is the curiosity she has in Quiz when few things about him make much sense. She's also a bit of a lost girl trying to pick out a place for herself in the world. A daydreamer, she relishes in the moments she's allowed to have for herself, the moments of imagining the adventures of her favourite radio show heroine. She's a well-meaning girl who knows when something feels wrong, who knows when the truth needs ferreting out. But danger lurks because some very powerful people want the truth kept secret.

The different pieces that make up this book are woven together so well. The ways the people in the city are separated, by social standing, religion, and magic. It's a glamorous city with its own biases and rejections, its unwarranted disdain of those less fortunate. This book treats those divisions so well, presents them with such clarity that you cannot escape the harsh truth of the world, the unfairness of it. The wondering why those with money and influence would fear those without.

This book is all kinds of sweetness and sadness and magic. I want to push this book into the hands of kids and teens and adults to see which pieces of Tarreton they see in the real world. Which parts of familial support and complicated friendships they see. How often they find someone to be discriminated against because of their religion, their race, or their economic standing. For as many happy moments as there are, there are sad moments. A magical city, yes, but that doesn't mean it's free of hatred or fear.

(I received a finished copy of this title from Simon & Schuster Canada.)
Posted by Lindsay at 6:00 AM