It's raining! Sort of. It rained early Friday morning, then most of the day was cloudy, but it's supposed to rain on and off for the next week. Which is great, considering the super hot summer that's led to a drought on most of the west coast. It also means that there's a good chance that the fall and winter will be mild and rainy.

I had a DNF moment this week when reading an e-galley. I don't know what it was, it just didn't grab me. Things were happening, but sometimes I didn't know what was going on. Sometimes the characters were cruel or emotionless. *sigh* I might finish it, but it expires soon and I have a lot to get through for September and October. Curse you September 22nd and October 6th release dates. *shakes fist at the sky*

Reviews going up next week will feature Storm by Amanda Sun (Tuesday) and Tonight the Streets Are Ours by Lelia Sales (Friday). :) 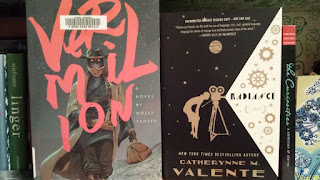 Vermilion by Molly Tanzer (borrowed from the library)
Radiance by Catherynne M. Valente (ARC from Raincoast Books)
Posted by Lindsay at 8:00 AM