It's day 2! And we're kicking off with a blog tour stop for a debut novel!

Trina St. Jean grew up in a small town in northern Alberta, Canada, but left in pursuit of degrees in psychology and education. During a decade out east, she picked up a husband with a cute accent and an MFA in Writing for Children and Young Adults from Vermont College. She now lives in Calgary, where she teaches ESL and tries to stay out of trouble with her husband and two daughters. Blank, out April 1 with Orca Books, is her first novel. You can pay Trina a visit at her website or on Facebook. :) 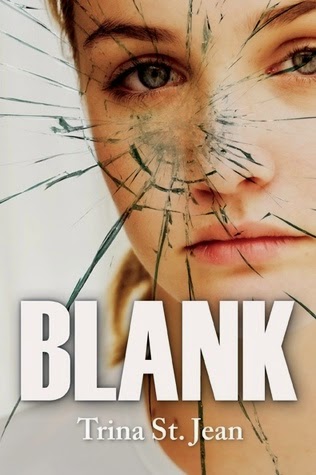 Q: At the start of the book, Jessica's voice is rather distant and confused. She feels numb, lost in a fog of missing memories. Lost in a fog of a missing identity. She's actually caught between two identities, who she was and who she is now. How difficult was it to write Jessica, to write from the point of view of someone who sort of knows the world around her but doesn't know herself? How hard was it to fit her different identities together, the mundane but happy girl and the confused, broken girl?

A: I was very aware from the beginning that it was going to be a huge challenge to get Jessica's voice down on paper, specifically because she was so broken and confused. I wanted to get that across but not sink the reader into a pit of despair, and I also wanted to show glimpses of Jessica being a "good" person even if she couldn't remember what that meant exactly. In an early draft of the story, I remember a reader saying that they weren't sure they liked Jessica very much, that she was sarcastic and sad. I had to really tread carefully in my rewrites, to make sure that through the sarcasm and anger there were some hints of joy. Although it wasn't calculated to happen that way, I think the interactions she has with Stephen, her little brother, show a softer, more playful side of Jessica.

Q: Jessica's anger, her rage at not knowing who she is, not understanding who she used to be, is rather visceral when it appears and takes control. Which is understandable. It's like she's suddenly there, in someone else's place, expected to be normal and continue on like nothing happened. How important was it to show her being angry, being frustrated with the world and with herself?

A: I knew from research and from hearing personal stories of people affected by brain injury that a common symptom is anger. This anger is not only a natural result of the frustrations victims face in dealing with challenges their injury present, but also has a physical cause. Impulse control and the ability to manage emotions can be hindered by brain injury. So, yes, it was essential that I include this aspect of Jessica's situation. In the first drafts of the novel, there were even more scenes of her lashing out, but I realized eventually that I didn't need so many to make the point.

Q: In the background there's Jessica's family, supportive and caring but lost in their own way. Especially Jessica's mother. To me, it seemed that she just couldn't understand why Jessica's memories didn't come back quickly, why she wasn't suddenly the same girl she was before. As important as it was to get Jessica's voice right, how important was it to also get the voices right of those around her?

A: It was very important to get their characters right, too, although in all honesty I wish I had more "space" in the novel to fully develop the secondary characters. Jessica was the main focus, it's her story, but I could probably have written an entire novel from each person's perspective. I did feel the family's pain. As a mother myself, I could only imagine how completely crushing it would be to have your daughter not remember you but remember the family dog. When one of my daughters was about one year old, we went on a family holiday and she was so thrilled to be around her grandmother she began rejecting me. It was completely innocent and natural and very temporary, but I'll never forget how much it hurt nonetheless. It hit me then that I needed her as much, maybe more, than she needed me. Jessica's mother has poured her life into raising her girl and now that girl is right there in front of her, but not at all the same person. That would tear any parent apart inside.

In earlier drafts, there was also more tension between Jessica and her mother. Her mother was more dominating, but eventually I decided that took away from the main story. Overall, though her mom struggled to understand how her daughter didn't remember, I think she was trying her best to love and support her daughter in the only way she could.

Thanks so much to Trina for stopping by and answering my questions. Blank is out now so go check it out! And make sure to check out
Posted by Lindsay at 6:00 AM

Email ThisBlogThis!Share to TwitterShare to FacebookShare to Pinterest
Labels: blog event, Canada, contemporary, Q and A, YA